The Opposite of Worries- two famous books together in one volume 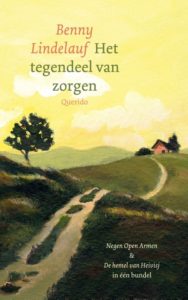 It has been almost 20 years since ‘Nine Open Arms’ appeared and 12 years ago the successor ‘Fings war’ was released. Both books helped me emerge as an author. They are books that are particularly dear to me, because they arose from the stories my grandmother told me about a house at the end of a long winding road in South Limburg.

And now, for the first time, both books are bundled together in a clump of about 600 pages.

The book will be published in mid-March 2022.